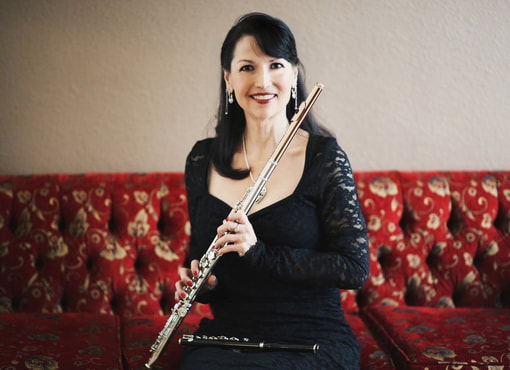 CINDY ANNE BROZ was born and raised in Salt Lake City and began studying flute at the age of nine. Her primary teachers included members of the Utah Symphony (Erich Graf, Michael Vance, and Jane Wadsworth). Ms. Broz earned a B.A. in Flute Performance at the University of Utah under the tutelage of Erich Graf. She also studied privately with Julius Baker and Claude Monteux. While living in Utah, she performed with the Utah Opera, the Salt Lake City Chamber Orchestra, and the Ballet West Orchestra.

After moving to California in 1982, Ms. Broz established a career as a free-lance musician performing as a soloist, in chamber ensembles, and orchestras throughout Southern California. An active theater musician, she has played at San Diego’s leading venues including The Old Globe Theater (where she performed in the world premiere of Stephen Sondheim’s Into the Woods), the La Jolla Playhouse, and the San Diego Civic Center. She served as principal flutist with the California Consort Chamber Orchestra, and has performed with the San Diego Symphony, the San Diego Chamber Orchestra, and the Classics4Kids Philharmonic. Since 2010, she has served as principal flute for the Pacific Lyric Opera Company. Cindy is a founding member of The WindSong Consort (mixed winds/wind quintet) and Les Flûtes de Salon (flute quartet).

An avid supporter of new music, Broz has given full recitals introducing major works by composers Eric Ewazen and Daniel Dorff, including Ewazen’s A Night in New Orleans (Sonatine for Solo Flute) and Dorff’s Sonata (Three Lakes) for Flute and Piano, both of which she commissioned. In 2019, Broz will record an “all Ewazen and Dorff” CD for Albany Records, including five works written for her and five first recordings. Cindy recently commissioned composer Samuel Zyman to write a new work for flute and piano which she will premiere with the composer at the 2019 National Flute Association Convention in Salt Lake City, Utah.

Cindy Anne Broz has written articles for Flute Talk, Flutist Quarterly, and many other publications, and she was the subject of a full-length article in Flute Talk. Her articles on practice techniques, college audition preparation, and studio management and teaching have been published in newsletters across the US and abroad. Several of her articles have been adopted as curriculum for university music programs. Her flute and clarinet edition of A Treasury of Puccini Duets: 8 Favorite Arias is published by Theodore Presser Company and received the J.W. Pepper "Editor's Choice Distinction."

Cindy’s flute studio accepts students of all ages, abilities, and interest levels. She provides a comprehensive evaluation and creates a customized teaching plan based on each student's needs and desires. Her specialty is teaching serious and committed students through a highly developed curriculum to prepare young flutists for university and conservatory performance study. Many of her students, and those who come to her for specialized coaching, have received admission and scholarships to top conservatories and universities. She has adjudicated flute competitions in California, Utah, New York, New Jersey, Pennsylvania, and Delaware, and for the National Flute Association. Cindy provides audition and performance preparation for advanced students, and also offers masterclasses in pedagogy and performance.

Cindy currently serves on the board of the Flute Society of Greater Philadelphia, and on several committees for the National Flute Association.